Rehman Ullah Khan*, Sultan Mehmood, Saad Ullah khan, M.Subhan
The aim of this study was to record traditional medicinal uses of weed flora of sugarcane crop in district Bannu,rnKhyber Pakhtunkhawa during the year 2012. It was the first attempt to understand the importance of weeds withrnspecial reference to their medicinal uses in this area. Study was conducted in 25 distant villages of District Bannu inrnorder to collect information from 100 resourceful persons including 85 men and 15 women related to the collectionrnand use of common weeds found in the field of sugarcane. Questionnaires were developed to collect data from localrnInhabitants. Total of 73 weed species belonging to 65 genera and 27 families were documented having medicinallyrnimportant and are being used by the local people for treating their various diseases. Out of the 27 weed families,rnthree were monocots (with 13 genera and 13 species) and 24 were dicots (with 52 genera and 60 species).rnAsteraceae contributed significant number of species (12 genera and 12 species), followed by Poaceae (11 generarnand 11 species), Papilionaceae (5 genera and 5 species), Solanaceae (4 genera and 5 species), Malvaceae (4 generarnand 4 species), Amaranthaceae (3 genera and 5 species), Euphorbiaceae (3 genera and 3 species), Polygonaceae (2rngenera and 4 species), Plantaginaceae (2 genera and 2 species), Verbenaceae (2 genera and 2 species),rnChenopodiaceae (1 genera and 3 species), and Convolvulaceae (1 genera and 2 species). The rest of the familiesrnwere represented by only one species each. Data were systematically arranged in alphabetic order of botanical name,rnsynonym, family, followed by English name, local name, part(s) used and ethnomedicinal uses. It was found that thernarea is rich in indigenous knowledge associated to weeds but still there is large number of underutilized weedsrnwhich could not prove useful yet. It is suggested that such type of studies should be carried out in future onrnutilization and conservation of indigenous knowledge of weeds.
Click here for more related graphics 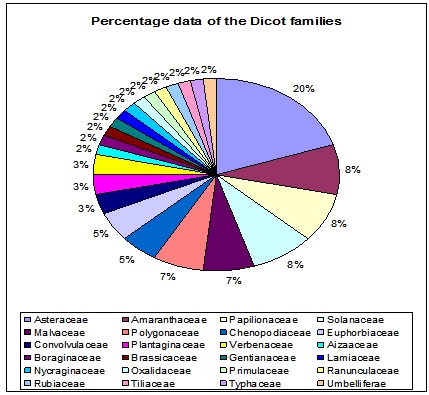