Ahmed M Taqi Al-Mosawi
Background: Apples are rich source of phytochemicals, and their consumption linked with reduced risk of some cancers, cardiovascular disease, asthma, and diabetes. In the laboratory, apples have been found to have very strong antioxidant, inhibit cancer cell proliferation, decrease lipid oxidation, and lower cholesterol. Objective: Evaluation of the antipyretic effect of apple juice. Methods/ Design: Twenty albino rats were used in the study. Pyrexia was induced by subcutaneously injecting 20% w/v brewer's yeast suspension, and the rectal temperature of each rat was measured, before and after 17h of injection of the yeast, and every hour for four hours after treatment. The rats were divided into: group A as control, Group B treated with paracetamol, group C treated with apple juice. Results: The results showed no significant changes in rectal temperature in group A after 1, 2, 3, and 4hour from the initial time, while demonstrated a significant decrease in group B after 1 and 2 hour of treatment, and significant decrease in group C after 1, 2, 3 and 4 hour of treatment, and when the rectal temperature after 1h, 2h, 3h, and 4h in groups B and C were compared to their relatives In group A, there was a significant decrease in group B after 1 and 2 hour of treatment, while a significant decrease after 1, 2, 3 and 4 hour in group C. Conclusion: Apple is effective as antipyretic. However, describing the active constituent which is responsible for antipyretic effect and its mechanisms of action are required. 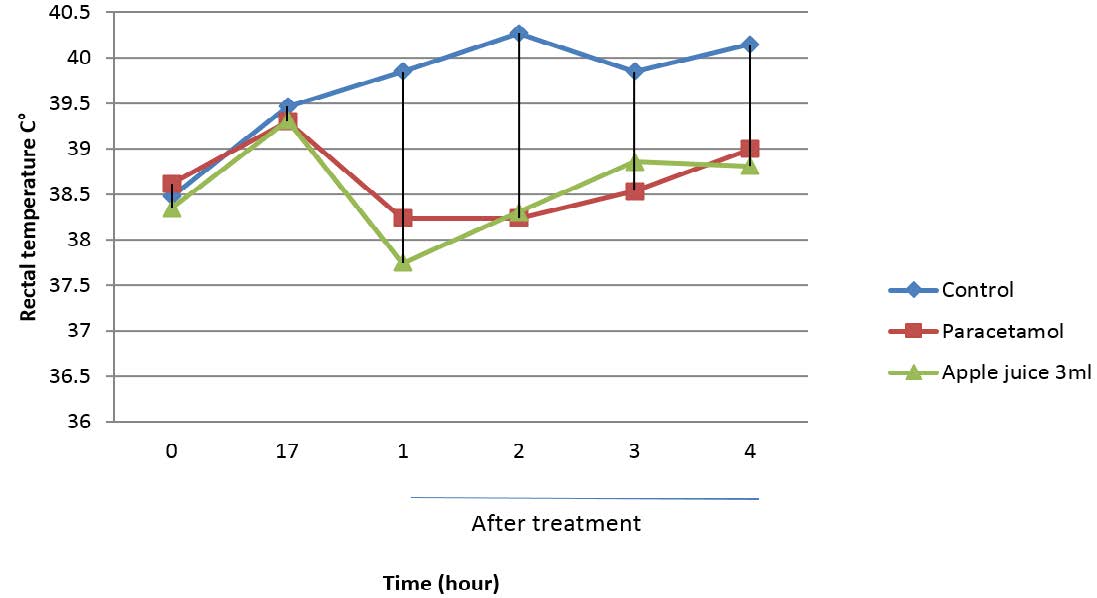