Y Padma, N Sarojinidevi, K Venkata Ratnam, G Tirupati Reddy, RR Venkata Raju
Objective: An ethnobotanical survey was conducted in forest and adjoining rural areas of Rayalaseema region, Andhra Pradesh to collect firsthand information on herbal remedies used for snake bite.
Methods: The ethnomedicinal study was carried out in four districts of Rayalaseema region of Andhra Pradesh during 2009-2012. The firsthand information on their traditional use of medicinal plants was recorded. Repeated interviews/enquiries were made to understand their knowledge, methods of diagnosis and mode of administration from the tribal communities (Chenchus, Sugalis, Yanadis and Yerukalas) inhabiting in and around the forests of the study area.
Results: The present study enumerates 41 ethnomedicinal plant species belonging to 26 families used by the tribal communities/medicinal healers of Rayalaseema region, used as antidotes to snake bite. The collected crude drugs were taxonomically identified and the botanical names were enumerated alphabetically along with their family, vernacular name, part(s) used and mode of preparation/administration.
Conclusion: The importance of traditional medicinal system among the tribal communities of Rayalaseema region of Andhra Pradesh has been highlighted in the present study.
Click here for more related graphics 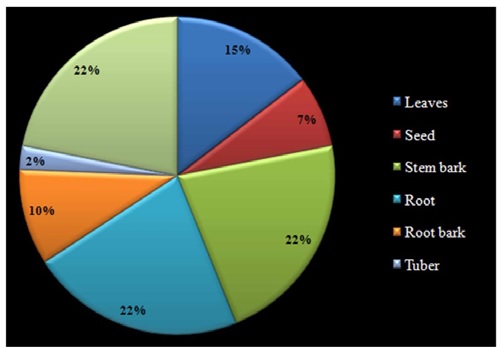