Adedapo AA, Ogunmiluyi IO, Adeoye AT, Ofuegbe SO, Emikpe BO
Chromolaena odorata is used for its many medicinal properties, especially for external application as in  wounds, skin infections, inflammation etc. The antidiabetic property of the methanolic leaf extract of Chromolaena odorata was evaluated in Wistar rats by inducing diabetes using a single intraperitoneal (I.P) injection of freshly prepared solution of alloxan monohydrate. Animals with glucose level of 200mg/dl were selected for the study and divided into 5 groups of 5 animals per group. The 6th group was not induced with alloxan. Treatment lasted for 28 days. Phytochemical analysis of the powdered and processed leaves was also carried out. After 28 days blood samples were collected for haematology and serum chemistry profile. Some organs were also collected for histopathology. Phytochemical analysis showed that the plant contained flavonoids, saponins, tannins, and anthraquinones while alkaloids, terpenoids and cardiac glycosides were absent. The group pre-treated with the 200mg/kg of the extract showed moderate changes in the levels of Albumin, ALT, AST, BUN, Cholesterol, Globulin, Glucose, Total Protein and Triglyceride in the animals and this was followed by the rats given 400mg of the extract post-induction. The histopathological changes in the organs were also moderate for the pre-treated group. The level of each of the parameters increased initially for the first 14 days. The effect of the extract is also dose dependent as the 400mg/kg dose post-induction exhibited a higher medicinal potential than the 200mg/kg dose post-induction. Anaemia was found to accompany the development of diabetes mellitus as there was a decrease in the levels of RBC, PCV, HB, MCH, MCV and MCHC when compared to the positive control rats. This anti-anaemic activity of the extract can be attributed to the high iron content of its chlorophyll. In the lipid profile studies, the increased level of cholesterol and triglycerides observed in the diabetic control group and also after induction of diabetes also suggested that the development of diabetes mellitus is usually accompanied by anomalies in body lipid composition. In conclusion, the result of this study showed that the methanol leaf extract of Chromolaena odorata exhibited hypoglycemic, hypolipidemic, anti-anaemic and possibly immune-stimulating and prophylactic properties.
Click here for more related graphics 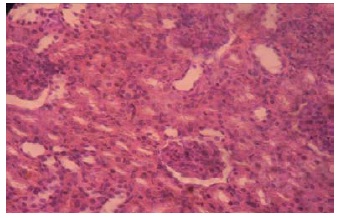